US personal income falls after lapse of Covid benefits

US personal income dropped by 2.7 per cent in August after the lapse of emergency unemployment benefits for millions of Americans, raising fears that lower consumption could dampen the economic recovery.

According to data from the commerce department’s Bureau of Economic Analysis, the drop in income was worth $543.5bn and larger than economists were predicting.

The figures highlight how critical fiscal stimulus measures have been to the US economy as it recovered from the pandemic lockdowns. That government support has now faded after a political stalemate in Washington prevented the passage of new economic relief measures.

Nancy Pelosi, the Democratic House speaker, and Steven Mnuchin, the US Treasury secretary, have been engaged in a last-ditch effort to strike a compromise, but there was as of Thursday morning no certainty that they could reach a deal.

“The main engine of economic activity is at risk of stalling as the economy rounds the final corner of 2020,” Gregory Daco, chief US economist at Oxford Economics, wrote in a note on Thursday. “With compensation growing at a slower pace and government transfers diminishing, consumers dipped into their savings to finance their outlays — this is not a sustainable reality.”

The personal income data was released as US labour department figures showed the pace of US unemployment applications slowing last week but remaining above 800,000, highlighting the very gradual rebound from coronavirus shutdowns.

There were 837,000 initial jobless claims on a seasonally adjusted basis, the US Department of Labor said, compared with 873,000 a week earlier and lower than economists’ forecast for 850,000. The figure marked a fresh low since the pandemic began, but remained elevated. Weekly jobless claims, which peaked near 6.9m at the end of March, totalled 211,000 in the week before coronavirus first dealt a blow to the economy.

The number of Americans actively collecting state jobless aid also eased to 11.8m, down from 12.7m in the week that ended on September 19 and a pandemic-era high of 24.9m. Continuing claims equalled 8.1 per cent of the workforce. The insured unemployment rate, considered an alternative measure of joblessness, was 8.7 per cent the week before.

Covid-19 outbreaks in the US south and west have abated since developing in May and June, raising hopes for a steadier jobs recovery. Florida and Texas, two of the states hit hardest during the summer, have recently taken steps to relax or lift restrictions on businesses.

California — the most populous US state — has temporarily stopped accepting jobless claims for a two-week period to address fraud and work through a backlog of applications. Last week’s national data included an estimate for new claims in the state.

Weekly jobless claims fell the most in Florida, Texas and Georgia, according to advance figures that are not seasonally adjusted. Some states, including Maryland, Illinois and New Jersey, registered a slight uptick from the week before. 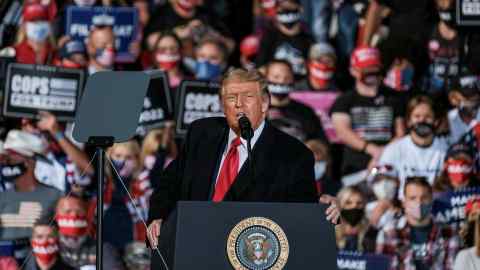 The US has recovered nearly half of the 22m jobs lost in April and May at the height of coronavirus shutdowns. The labour department is due to publish its latest monthly figures on Friday and economists have forecast a gain of 850,000 payrolls in September, compared with a rise of 1.4m jobs the month before. The unemployment rate, which peaked at 14.7 per cent in April, is expected to fall to 8.2 per cent from 8.4 per cent.

Thursday’s jobless claims report showed that a total of 26.5m people were claiming benefits in state and federal programmes as of September 12, up from 26m, according to unadjusted figures that are reported on a two-week delay. This tally includes Pandemic Unemployment Assistance claims and another Cares Act measure that extended unemployment benefits for up to 13 weeks.

The federal PUA programme, which offers benefits to the self-employed or other individuals who would not qualify for regular unemployment compensation, registered an increase in first-time claims to 650,120 from 615,599 on an unadjusted basis last week.

Comcast has big streaming dreams to compete with Netflix and Disney

Comcast wants to be a major player in streaming entertainment, but it's late to a crowded and pricey game. Read More Source link
Read more
Business

The ‘incredible’ U.S. tech stocks to buy when there’s a dip: Investor

A man uses his mobile phone as he walks past advertising for the new iPhones outside the Apple store in Hong Kong on...
Read more

As an increasing number of startups sell investors on mobile apps that help consumers prioritize well-being and mindfulness, other startups are looking for...
Read more
Load more