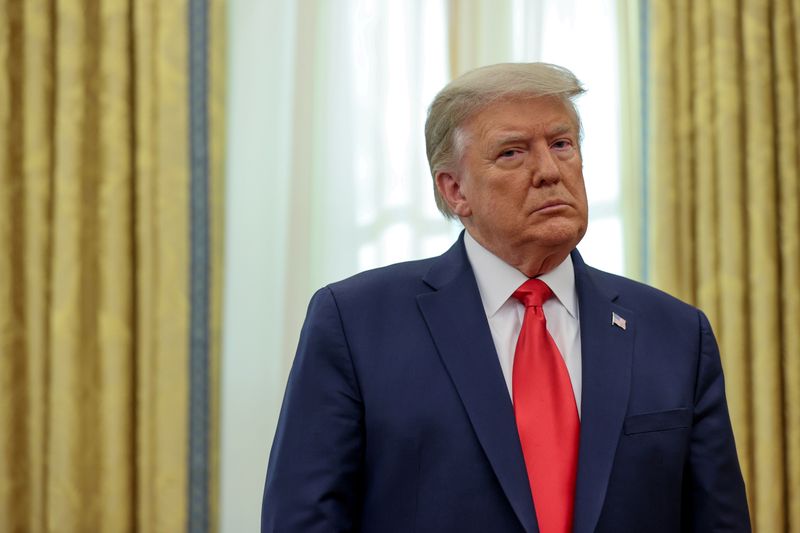 © Reuters. FILE PHOTO: U.S. President Trump participates in a medal ceremony in the Oval Office at the White House in Washington

By Joseph Ax and Makini Brice

(Reuters) – U.S. President Donald Trump campaigns on Saturday for two Republican senators in Georgia facing January runoffs, but some in his party worry he may do more harm than good if he focuses on personal grievances over his loss in the Nov. 3 election.

Trump has repeatedly and without evidence asserted widespread fraud in the November election, a claim rejected by state and federal officials, including in Georgia, which President-Elect Joe Biden became the first Democratic presidential candidate to carry in a generation.

The outgoing president has also attacked Republicans who have refused to endorse his claims, such as Georgia Governor Brian Kemp and Secretary of State Brad Raffensperger. Statewide recounts, including a painstaking review by hand of some 5 million ballots, turned up no significant irregularities.

Trump’s penchant for making his political rallies all about him – and now, about his claims the U.S. electoral system is rigged – has raised concerns among some Republicans that his appearance in southern Georgia could end up turning voters away.

Trump, who a source said has privately referred to Kemp as “a moron” over his handling of voting issues in Georgia, pressured the governor in a Twitter post and a phone call on Saturday to take steps to benefit his candidacy.

“I will easily & quickly win Georgia if Governor @BrianKempGA or the Secretary of State permit a simple signature verification. Has not been done and will show large scale discrepancies. Why are these two ‘Republicans’ saying no?” Trump wrote on Twitter.

Kemp responded on Twitter that he had spoken to Trump about the president’s concerns. “As I told the President this morning, I’ve publicly called for a signature audit three times,” he said.

The Washington Post said Trump urged Kemp to call a special session of the state legislature to get lawmakers to override the vote results in Georgia and appoint electors who would back him. The White House declined to comment.

Matt Towery, a former Georgia Republican legislator who is now a political analyst and pollster, said Trump could help Republicans if he talks about the candidates, but warned:

“If he talks about them for 10 minutes and spends the rest of the time telling everyone how terrible Brian Kemp is, then it will only exacerbate things.”

Kemp will not attend Trump’s rally scheduled for 7 p.m. EST in the southern city of Valdosta, according to the Atlanta Journal-Constitution, one day after the death in a car crash of Harrison Deal, a close family friend of the governor and staffer for Georgia Senator Kelly Loeffler.

The Jan. 5 runoffs pit two Republican senators, David Perdue and Loeffler, against well-funded Democratic challengers Jon Ossoff and Raphael Warnock seeking to capture a state that has not elected a Democratic senator in 20 years.

The races will determine which party controls the U.S. Senate. Democrats need to gain both seats to seize a majority. If Republicans win one seat, they will retain control and be able to block much of Biden’s legislative agenda.

Two pro-Trump lawyers, L. Lin Wood and Sidney Powell, have argued that Georgians should not vote in the runoff until issues from the 2020 election are resolved in the state, even after lawsuits they have filed to overturn the results have failed.

He added that he would be voting for the two Republican Senate candidates, although both had called on him to step down.

On Saturday, Wood wrote on Twitter that wins for Loeffler and Perdue would not be necessary for Republicans, as Trump reversing the presidential election results would mean Vice President Mike Pence could break ties in the Senate.

REPUBLICANS IN A BIND

How Trump will handle the situation in his first post-election rally is unclear.

One Trump adviser said the hope was he would argue Republicans should produce a huge turnout in the runoffs to erase any questions about voter fraud, but acknowledged that Trump would probably talk more about his grievances than about the candidates.

The Washington Post contacted all 249 Republicans in the House and the Senate. Two of them told the Post they consider Trump the winner despite all evidence showing otherwise. And another 222 GOP members — nearly 90% of all Republicans serving in Congress — would simply not say who won the election.

In another Twitter post, Trump said he wanted the names of the 25 Republican members of Congress who conceded to the newspaper that Biden was president-elect.

Trump’s refusal to concede has forced Loeffler and Perdue to walk a fine line. Even as they warn voters of the dangers of a Democratic Senate majority, they will not say Biden won the White House and echo Trump’s attacks on Raffensperger.