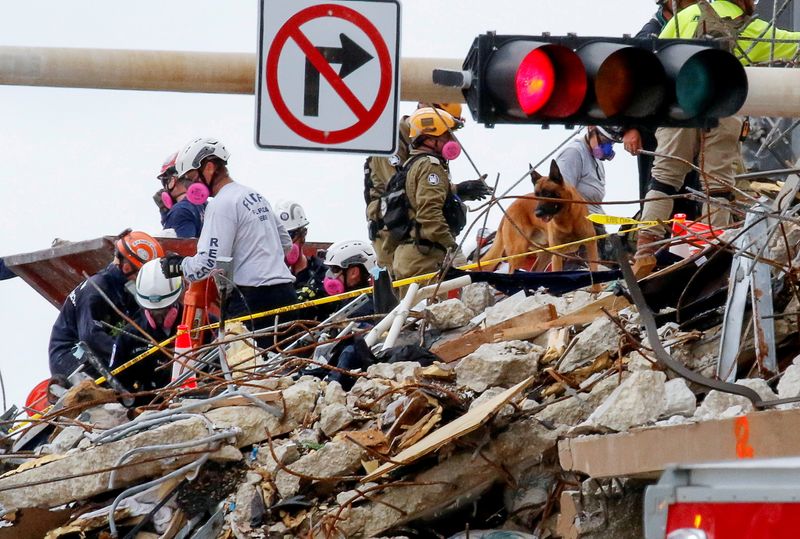 SURFSIDE, Fla. (Reuters) -Rescue crews found more bodies overnight in the shattered ruins of a collapsed Miami-area condominium tower, the leader of an Israeli search team said on Wednesday, after days of scant progress in discovering the fate of dozens of people still missing.

Twelve people have been confirmed killed in the disaster, which could rank as the deadliest accidental structural failure in U.S. history. But 149 others were still missing and believed trapped in the rubble.

Nobody has been pulled alive from the mounds of pulverized concrete, splintered lumber and twisted metal since the early hours of the disaster.

In an interview with CNN on Wednesday morning, Colonel Golan Vach, commander of the Israeli National Rescue Unit, said he had just finished a 12-hour shift and that workers “found some more people,” though he did not say how many.

“Unfortunately, they are not alive,” he said.

Vach, whose team arrived in Miami on Sunday to join the rescue effort, said crews were working in the space between collapsed balconies and had discovered some tunnels large enough for a person, though most of the debris is “very, very tight.”

“The way I look at it, as an old Navy guy, is that when somebody is missing in the military, you’re missing until you’re found, and we don’t stop the search,” Florida Governor Ron DeSantis told a news briefing on Tuesday.

“Those first-responders are breaking their back, trying to find anybody they can,” he said.

Investigators have not concluded what caused nearly half of the 40-year-old Champlain Towers South condo to crumple as residents slept in the early hours of last Thursday.

But a 2018 engineer’s report on the 12-floor, 136-unit complex, prepared ahead of a building safety recertification process, found structural deficiencies that are now the focus of inquiries.

As recently as April, the condo association’s president warned residents in a letter that severe concrete damage identified by the engineer around the base of the building had since grown “significantly worse.”

Miami-Dade County State Attorney Katherine Fernandez Rundle said she would convene a special grand jury, apart from any potential criminal investigation, to examine building safety and “what steps we can take to safeguard our residents” from similar disasters in the future.

Miami-Dade County Mayor Daniella Levine Cava said search teams extricated the remains of a 12th victim on Tuesday, leaving 149 people listed as unaccounted for. But she said police detectives were conducting an audit of all the missing-persons reports to “verify and remove duplicates wherever possible.”

A day earlier she used dire terms in relating how families of the missing were “coping with the news that they might not have loved ones come out alive and still hoping that they will.”

“Their loved ones may come out as body parts,” she said.

President Joe Biden and his wife, Jill Biden, planned to pay a visit on Thursday to the scene of the tragedy in the oceanfront town of Surfside, adjacent to Miami Beach, the White House said.

The victims include a father whose wife and children are also missing, a Puerto Rican artist who never let his disability hamper his spirits and a devoted couple of nearly 60 years.

No confirmed signs of life have been detected in the wreckage since last Thursday.

Fire officials have spoken of hearing faint sounds from inside the rubble pile – they acknowledged such noises could come from settling of the ruins – and finding voids deep in the debris large enough to possibly sustain life.

But Miami-Dade Fire Rescue Chief Alan Cominsky said on Tuesday that search personnel faced a daunting task while working in 12-hour shifts in the heat and humidity, hampered by intermittent showers and thunderstorms.

“That building collapsed almost in a footprint of where that building stood – we’re talking about 12 stories, with subterranean garages all within that same footprint,” Cominsky said.

Debris removed from the rubble pile is being trucked to a collection site to be sifted through by detectives for bits of evidence that will be cataloged and photographed “for future investigative purposes,” Miami-Dade Police Director Alfredo Ramirez said.

The rising ‘R’ factor in eight States, including Himachal Pradesh, Jammu and Kashmir and Mizoram, besides Kerala, continues to be a cause for...
Read more
Business

© Reuters. FILE PHOTO: A Tencent logo is seen at its booth at the 2020 China International Fair for Trade in Services (CIFTIS)...
Read more
Business

Germa ny will start offering Covid booster shots from September and make it easier for 12-to-17 year olds to get a jab, the health...
Read more

Logitech has introduced its new wired and wireless Zone earbuds this week announcing they will be available to purchase later this year during...
Read more
Load more