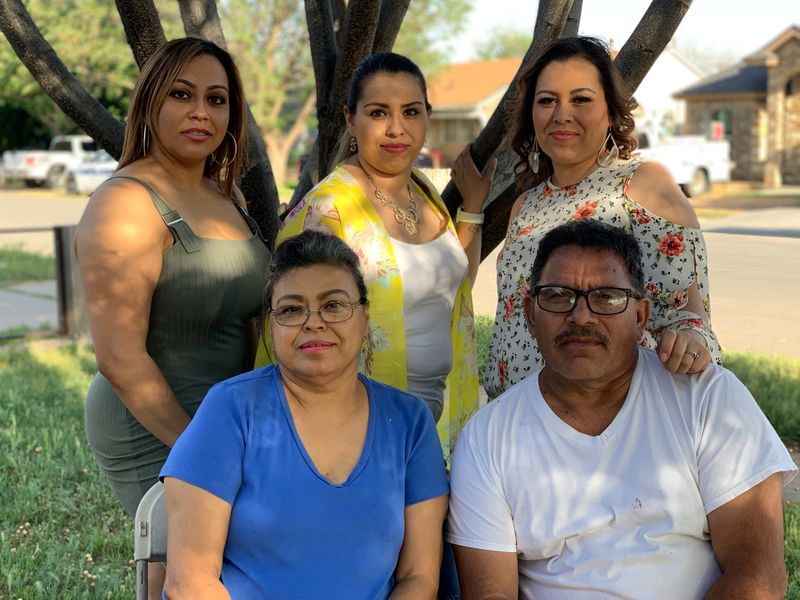 © Reuters. Grandfather deported hours before Biden’s freeze that spares others

CIUDAD JUAREZ (Reuters) – As U.S. President Joe Biden took the oath of office last Wednesday, Felipe Ortega sat in a van handcuffed and chained at the waist and feet, headed toward Mexico and the end of his 30-year life in the United States.

A day earlier, the 58-year-old grandfather of eight U.S. citizens was on his way to work when immigration agents surrounded his car in Midland, Texas, just blocks from his home. They told Ortega he had an outstanding deportation order from 15 years ago.

After one sleepless night in jail and a long ride to the border, Ortega, a Mexican national, was sent across the international bridge at El Paso in Texas around 6:30 p.m. on Wednesday.

Ortega missed by some 24 hours a dramatic policy change by the new president that could have spared him.

In one of his first acts of office, Biden rescinded an executive order by former President Donald Trump that had targeted more immigrants living in the country illegally for arrest and deportation, including those with no criminal records like Ortega.

The abrupt about-face on policy shows how, without a long-term fix from Congress, the fate of millions of immigrants can change dramatically with the flick of a presidential pen.

Those actions can also face swift challenges in federal court, throwing more lives in limbo as legal battles drag on.

This risk was apparent on Tuesday, when a federal judge in Texas blocked a 100-day moratorium on deportations issued by the Biden administration.

Immigration and Customs Enforcement (ICE (NYSE:)) deported more than 185,000 people in the 2020 fiscal year, not including those quickly expelled at the border under a rule Trump put in place during the coronavirus pandemic.

Biden has pledged ICE officers in his administration will use more discretion. On his first day in office he proposed an immigration reform bill to Congress, that if passed would provide a pathway to citizenship for an estimated 11 million people living in the country illegally.

On Tuesday Jan. 19, Ortega asked border agents before he was sent across the border if there was anything else he could do to continue fighting his case, but he says he was told no.

“I think that what they wanted was to kick me out before Biden signed what he signed,” Ortega told Reuters in a series of phone interviews after his deportation. ICE did not respond to a request for comment on Ortega’s case.

Ortega said his family never planned to stay long in the United States when they crossed in the 1990s. They entered on a 15-day visa intending to help his brother who was caring for a child with cancer. But the treatment dragged on for months and the Ortegas’ young girls started going to school. Life took over.

After working a few years as a ranch hand, Ortega moved into construction, eventually going into business for himself remodeling homes.

“My dad is his house, his work, his family and that’s it,” said his middle daughter Adriana, 35, who has a special ringtone programmed in her cell phone for her father’s frequent calls. “That’s why it is all kind of shocking.”

In 2006, Ortega was moving house from Sherman, Texas, to Midland when his truck broke down at a gas station. A local sheriff stopped to see if he needed help but then asked for his residency papers. When Ortega admitted he didn’t have any, he was arrested and sent to immigration court.

He lost his case and appealed, though he said he never knew the outcome until deportation officers handed him a three-page document with the 2007 denial last week because the paperwork didn’t arrive at his house after he moved, he said.

The document, seen by Reuters, said the judge believed he had not sufficiently proven his relationship to his U.S. citizen daughter and that his deportation would not cause his family enough “extreme and unusual” hardship to have his removal canceled.

Ortega returned to Mexico for the first time in 30 years to find his hometown of El Porvenir, around an hour south of Ciudad Juarez, totally transformed. When he and Maria started dating at 15, they would eat ice cream in the plaza and go to dances, strolling the streets late into the night, Maria said.

Now on a drive around the town a couple days after he arrived, he saw burned and abandoned buildings and few people outside, the legacy of years of violent clashes between rival drug cartels.

Staying with his brother-in-law – Ortega’s only remaining relative in the city – he is trying to make himself useful around the house by fixing up the aging electrical system and other odd jobs. But he had not been prepared to live out his retirement years in a different country than his family.

Maria, who has diabetes and other health problems, has to stay close to her U.S. doctors and can’t drive on her own. Adriana, a single mom, is thinking of picking up another job to help support her two aging parents on both sides of the border.

“Everything is different, I am scared to be in my hometown,” said Ortega. “I don’t know where to begin.”

Barring changes to immigration laws under Biden, there is currently no clear path for him to return.

Delhiites are slowly but surely shedding their fear for Covid-19 vaccination and turning up in better numbers for inoculation. This trend is visible...
Read more
Business

Bolstered by the inoculation drive and mild stiffening of the Covid-19 curve, economic growth in the country has gathered pace, said the monthly...
Read more

The Latest Microsoft Hack Looks Like It Could Be Huge